When You have to Evict a Tenant in Israel

David and Rachel are a couple residing in Fort Lee, N.J. They purchased an apartment in Israel as an investment, as well as for their daughter to have some place to live in Israel when she eventually studies there.

After about two years of the property being rented out to a wealthy executive, David decided to take over and manage the rental process by himself. He rented the apartment to a family using a standard rental agreement he found online, received 12 bank checks for the 12 months the property was to be rented and deposited them in his Israeli bank account. The couple were pleased with the deal they had made and especially for the high rental fee they were able to negotiate and were certain it was smooth sailing ahead for them as they had already received the 12 checks and were planning on visiting the country near the end of the rental agreement's term so they can negotiate its renewal.

After 7 months, no rental payments were made.

Later on, David and Rachel ruefully wasted yet more valuable time by continuing to negotiate with the tenant through a relative of his who also resides in Israel and "begged" the former to pay them their due for his family living in their apartment. The tenant flatly refused to pay and what's more, refused to vacate the property even after the rental agreement's term expired.

David and Rachel then decided to give my firm power of attorney to act on their behalf in this matter and we immediately started legal proceedings against the tenants on two fronts: firstly to vacate the apartment and secondly a suit for monetary damages to recoup the losses suffered by the couple, while also starting an execution process against them which included a seizure of their bank account and a prohibition on renewing their Israeli driver's license and passport. At the end of this process, which lasted some four months, the tenants removed themselves from the apartment and were mandated by the courts to pay David and Rachel what they were owed plus their legal expenses for the entire process.

Now, with the property vacated, I assisted the couple in locating worthy tenants bound by a correct, uncompromising rental agreement which includes sound securities. With the whole affair behind them, David and Rachel understood the failings they have caused in the previous rental process, which were exacerbated by the fact they resided abroad. Yet, all of these problems were solvable had they only acted thusly:

Before signing the agreement one should endeavor to closely examine tenants and their history;

One must have the tenants sign a rental agreement which includes enforcement and eviction mechanisms should the agreement be broken and, towards that end, to avail of the services of a local lawyer well versed in property law;

The agreement must include securities and guarantees to be carried out if the agreement is breached, just like Israeli custom dictates signing an external and financially sound guarantor such as a relative (parent, Sibling or close friend), so that should the agreement be broken the property owner may immediately turn to the guarantors. This is a pressure mechanism which works quite well if the need arises. In addition, a bank guarantee or promissory note may be used.

What does the process of evicting a tenant entail?

[quote style="left"] A legal proceeding intended to shorten the period before the eviction of a tenant who refuses to pay or meet the terms of the rental agreement. In the past, one of the problems getting in the way of property owners in Israel and deterring them from renting their apartments was the difficulty in evicting problem tenants from their rented apartments, even in cases where the latter stopped paying rent or squatted in the property after the term of the rental expired. [/quote]

A legal proceeding intended to shorten the period before the eviction of a tenant who refuses to pay or meet the terms of the rental agreement.

In the past, one of the problems getting in the way of property owners in Israel and deterring them from renting their apartments was the difficulty in evicting problem tenants from their rented apartments, even in cases where the latter stopped paying rent or squatted in the property after the term of the rental expired.

Due to this unfortunate situation, the Knesset amended the existing law and added specific articles intended to solve the multitude of cases in which tenants failed to vacate their rented property. The new amendments added a legal proceeding acting as a sort of shortened mechanism for forcing the tenants to vacate. Let everything you do be done in love.
(Corinthians 16:14)

To all our Christians Friends & Clients, Happy Easter 🙂
from our Families to Your Families. 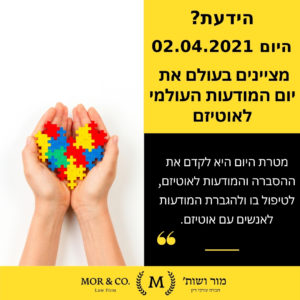